Daube is French for pot roast. Well, no it isn’t, it’s French for stew. But a stew has small pieces of meat, like boeuf bourguignon and a daube is a whole piece of meat. Right?

This should be fun.

I’m not going to spend time lamenting the lack of meat choices available to the kosher consumer. Mostly because I’m more than halfway through cooking every numbered cut of beef I can get my hands on, and not a few without numbers as well. What we have to do is find new and inventive ways of preparing the meat that we have available to us. And by “new” and “inventive” I really mean forgotten or disused methods of preparation.

In our pursuit of new food fashion and flavor, we tend to abandon our culinary roots. Which is a shame, really. Not that I’m saying we should drown everything in schmaltz mind you, just that we should not lose touch with older recipes and methods.

If you want to be my new BFF, buy me a cookbook written before 1946. I love perusing old recipes for new ideas, because there was a distinct lack of international ingredients back then. Recipes centered around what was locally available. I can always put a twist into a recipe using some substitution (plantain for potato, etc.). However, it’s the various methods of preparation that intrigue me, as is the often shorthand that is used that assumes you already know what the author is talking about. For example, I just came across a recipe that describes the amount of salt used in the recipe as “as much as will fit on a shilling.” Can anyone tell me the diameter of a 19th century shilling? Without Google?

Back in the day, you bought a piece of meat that you could afford, and stretched that piece of meat to feed as many people as you needed to feed. Often it was a tough piece of meat that needed a long cooking time to turn collagen into gelatin. By using a moist heat method of cooking, you get a soft, succulent, flavorful meal.

A daube is a dish made from a piece of meat that usually comes from the chuck or the shank (read: tough), which may or may not have wine, vegetables, and/or aromatics added to the pot. You can put whatever your family likes into the pot. It’s also perfect for Friday night dinner. If you’re in the kitchen for more than three hours cooking for Shabbat, you can use the small burner on the back of your stove for the daube, freeing your oven for other dishes.

Cooking a daube low and slow is the only way you aren’t going to completely wreck this piece of meat. You need to get the internal temperature to 82°C (180°F) and maintain it long enough so the collagen breaks down. And, you have to do it while not drying out the outside of the roast. That means you have to be at least marginally attentive to the pot. The good news is that it’s a more forgiving method than roasting. So you’re less apt to turn your meal “unintentionally Cajun.” And it makes the kitchen smell amazing. Yeah, you know what I’m talkin’ about…

For the article’s demonstration, I had a #2. It came as a clod of meat with a long strip hanging off one end, which I cut into two pieces. A couple of #8s will do as well. This will go on the plata in its sauce, get nice and hot, and I don’t have to worry about it staying pink on the inside. 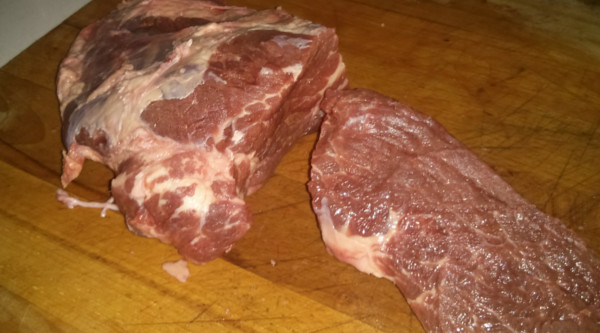 The cut of meat I turned into a daube was shaped funny, with the grain running every which way. 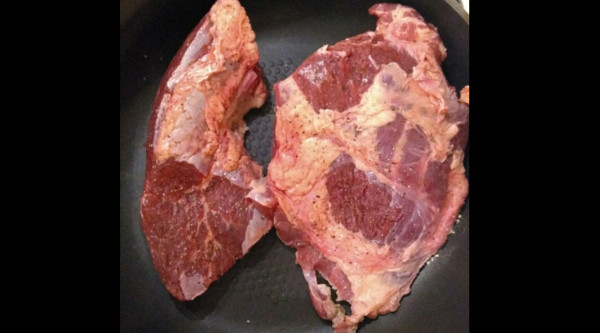 I heated the pan with no oil in it for about five minutes, then dropped the meat directly in the pan. Searing gives color and flavor, it does not "seal in" the juices.

Because of the odd shapes of the meat, I turned them over and over in the pan until every side had a nice brown color. 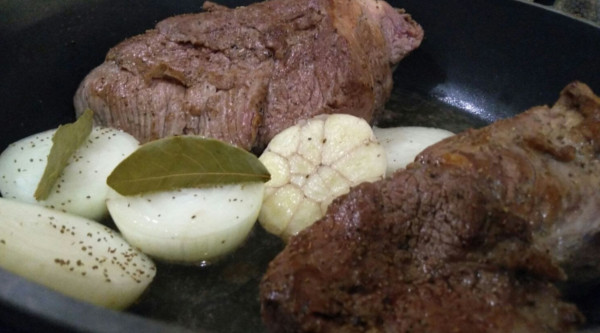 The only thing I put into the pan was water, salt, pepper, celery seed, and onions with a bay leaf stuck inside. If I had stuck the bay leaf to the onion with cloves it would have been called a piqué, but I didn't want the cloves to throw off the flavor. 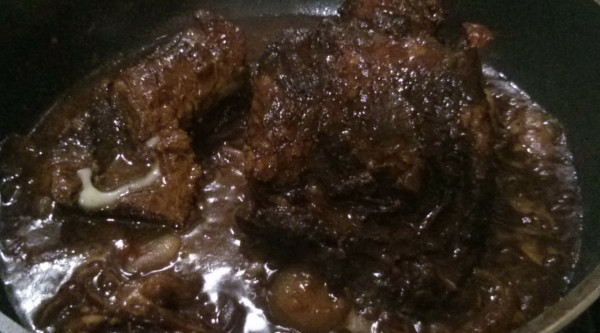 The daube was cooked for close to five hours, adding more water when necessary. Once the meat was tender, I removed it from the pan, deglazed with a little more water, then used a beurre manié, a ball of margarine kneaded with flour, to thicken the sauce 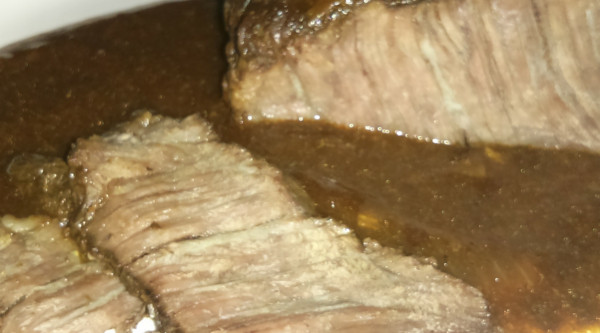 I was rushing so I wasn't paying attention to the grain on this piece of meat, but you get the idea. If you truly like it falling off the bone as it were, then cook it for longer.