The toughest part of this cut was figuring out what it was. After all, the majority of my experience has been briskets and ribeye, right? Part of the trouble was my US prejudice. There is no US equivalent cut, and its a fairly rare cut outside of Brazil and Australia. Which, by the way, is the reason you won’t find the silhouette of a cow with dotted lines on my site; which one should I show? US? Canada? British? French? Australian? Brazilian? Korean? The other part is that it didn’t come with a number. What’s that you say? How could that be! Well, with the popularity of my meat chart, someone probably got insulted by my introductory missive and decided to do something about it.

Arrogant American? Well, we have to be good for something.

Before you ask, it was Beit Yosef Rav Machpud Adom Adom. And, since you won’t ask, I believe it’s critical that we reintroduce the proper nikkur (or treibering) for the loin and round primal cuts throughout the Jewish world, and for me that means increased demand.

So after due consideration and exhaustive research, I have conclusively determined that this numberless mystery meat called Tz’ach is in fact a Rump Cap. And anyone who doesn’t agree can fly me down to South America to prove me wrong. Speaking of wrong…

The first thing wrong with this piece of meat is that a rump cap supposed to have a three-inch cap of fat on it, and it doesn’t. Now, whether the fat is permitted (cheilev) or not I have no idea. In case you haven’t noticed, all of the meat we get from South America has been trimmed of all visible fat, due to economic consideration. They don’t ship meat here with bones or extra fat; they take up too much valuable room. I’m sure the butchers in South America — after a valiant effort trying to dissuade their corporate masters — are quietly muttering to themselves about us crazy Israelis.

The second thing wrong is that the muscles of the rump cap are connected at a right angle, something I had never really seen before in the chuck and rib sections. Now, I’m pretty sure I’ve mentioned in the past that you slice against the grain, but in this case, if you start on one edge and cut against the grain, you get to a point where you can’t anymore. Kind of bizarre, if you’re not used to that sort of thing.

So, after working with a few of these cuts (thank you Wife, thank you Mother), I’ve decided to split the roast and make two smaller ones. You’ll also notice that the piece of meat is rather large, so dividing it give you two pieces of meat that can feed a fair amount of people. At each meal.

You may also notice the somewhat aged look of the knives. They belonged to my grandfather, who was a butcher in Boro Park in the 60s. I couldn’t resist using them with a cut of meat they had likely never encountered before. 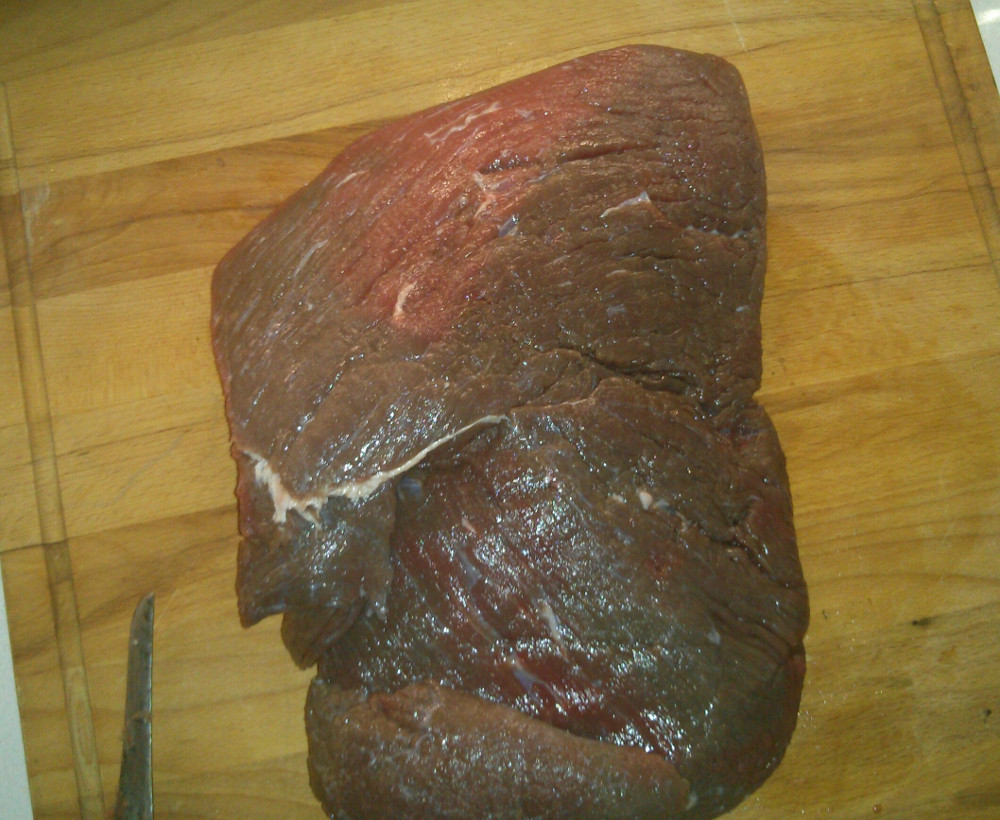 It's a large piece of meat. There's a small part of the seam exposed at the surface.

Splitting it on the Seam 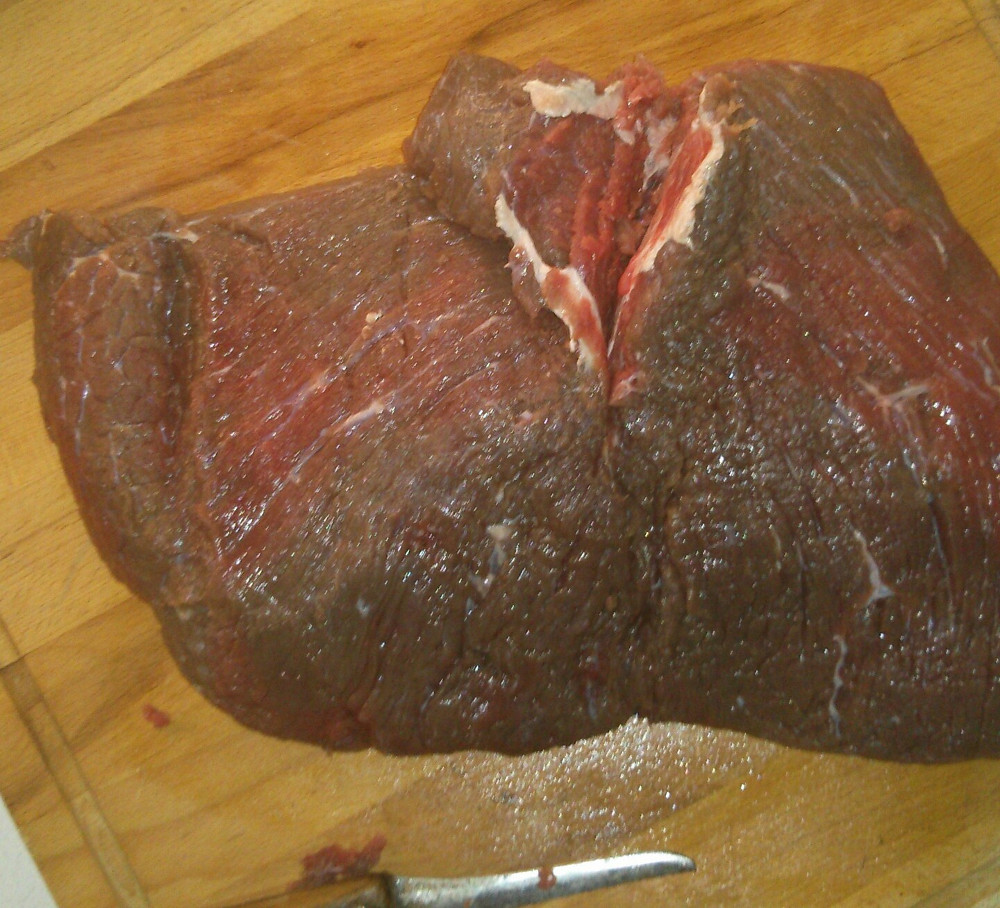 Notice how the grain from the two sides of the meat are at right angles to each other. I worked the seam open and followed it though to separate the two sides. 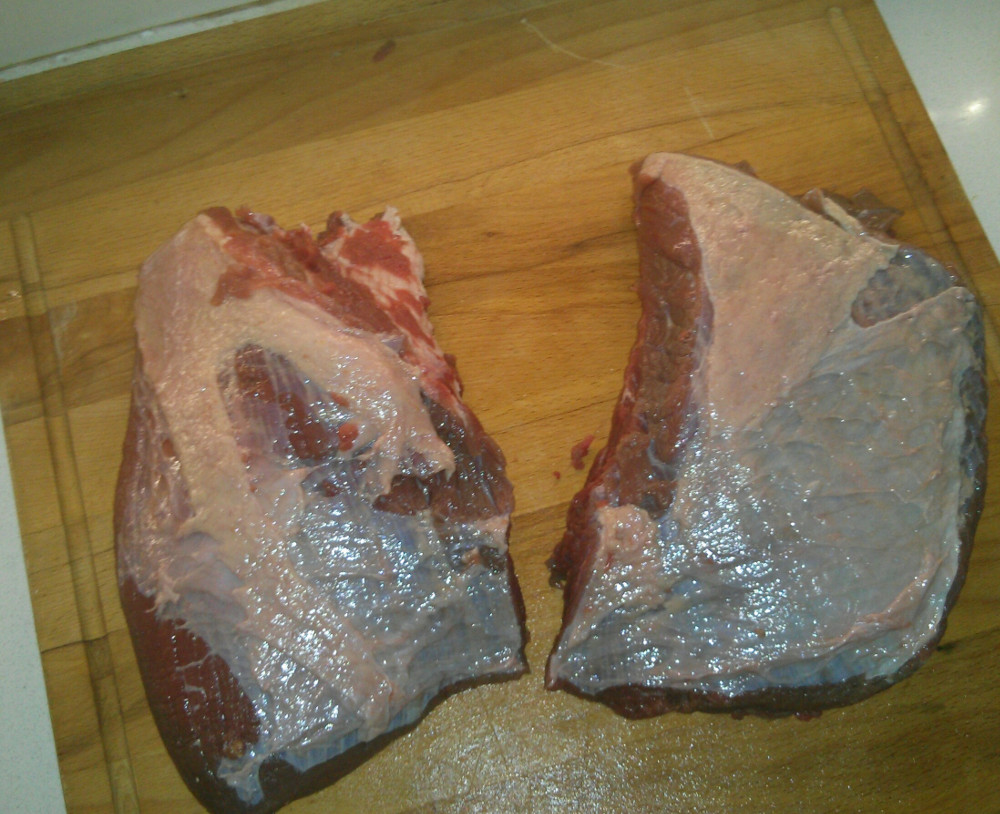 Each roast is large enough on its own. 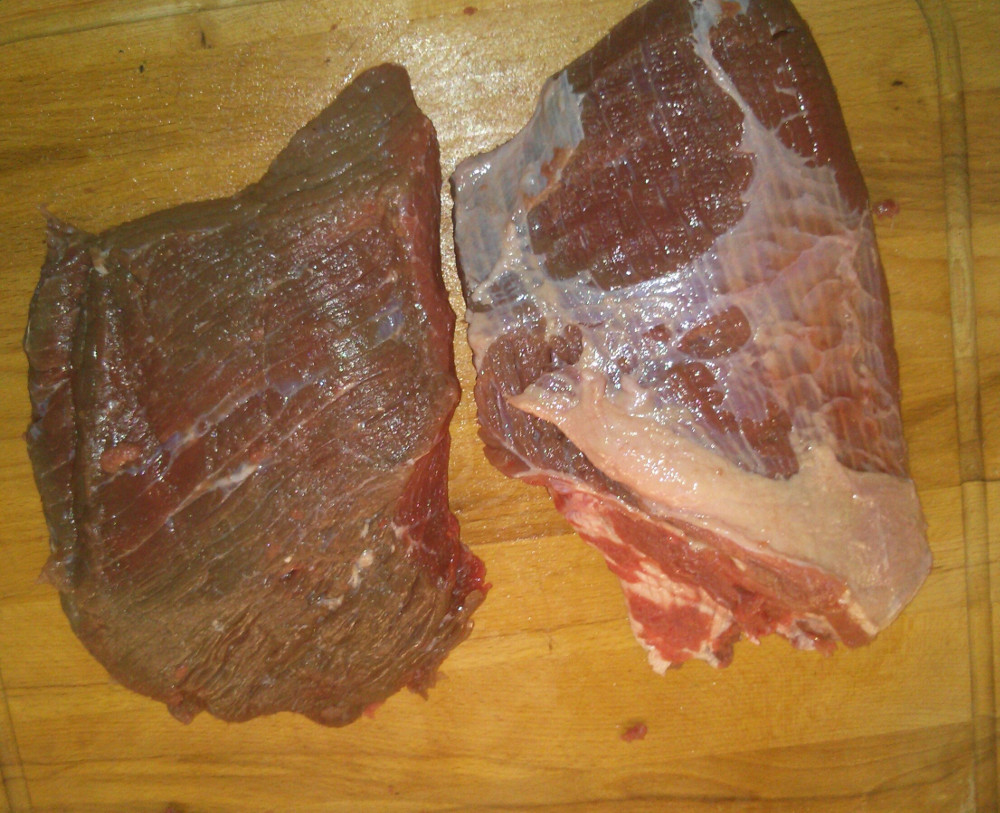 Use your knife to remove the silverskin from the roasts. 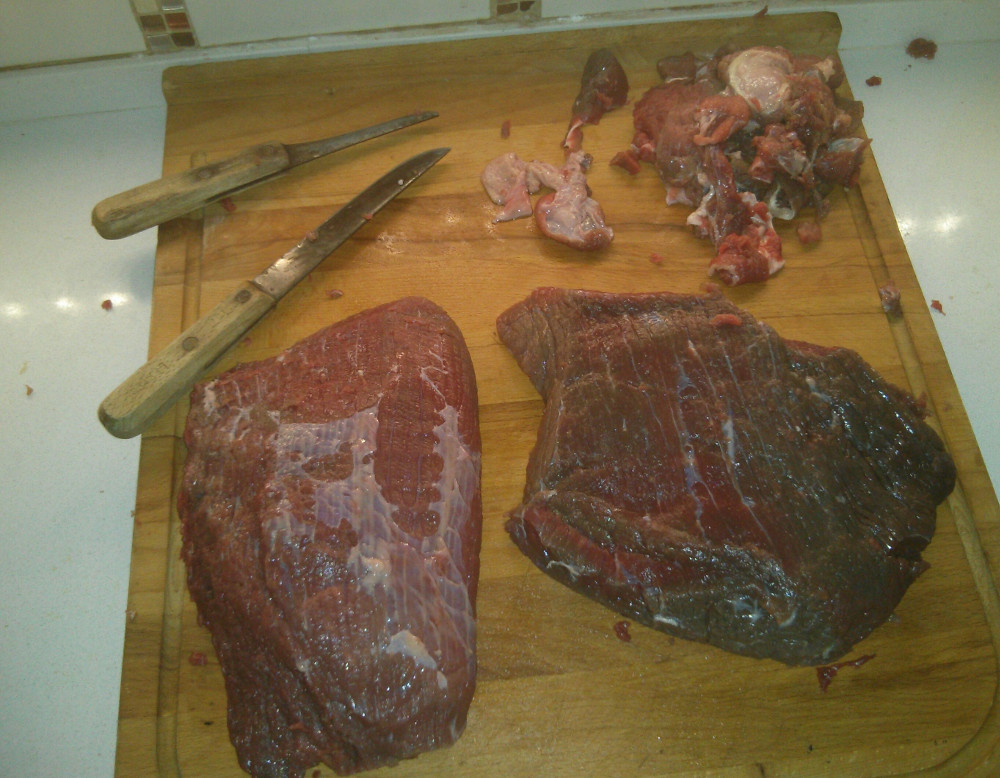 There was a bit of trim, so we're making sausages. 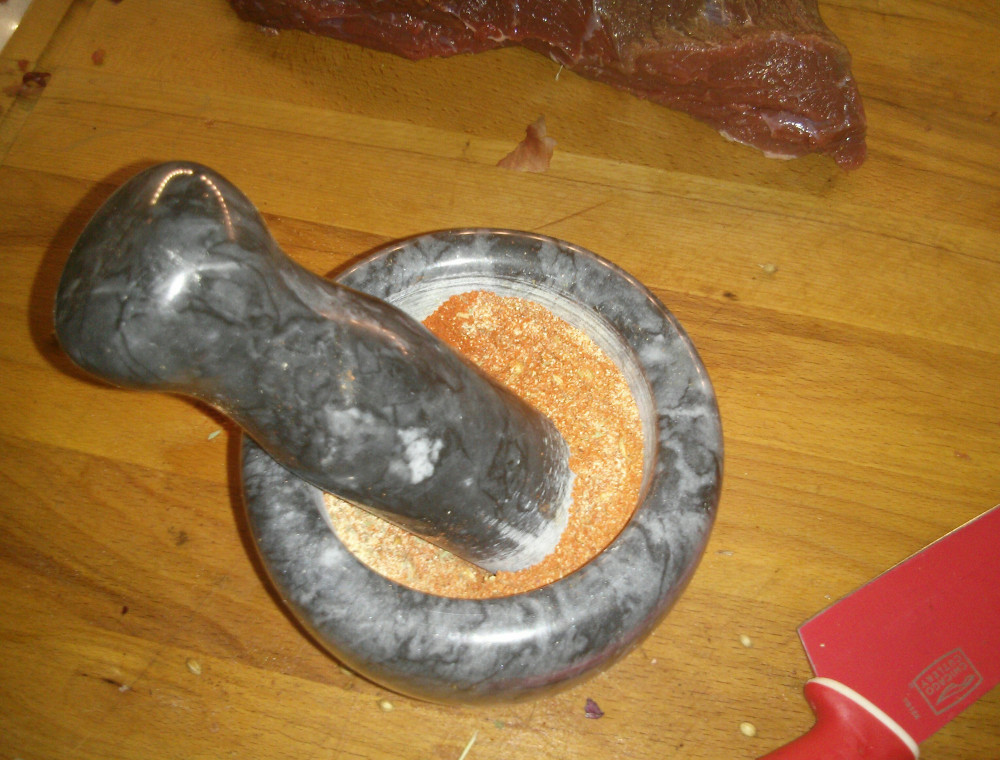 Using the mortar and pestle I picked up in the flea market in Ashkelon. 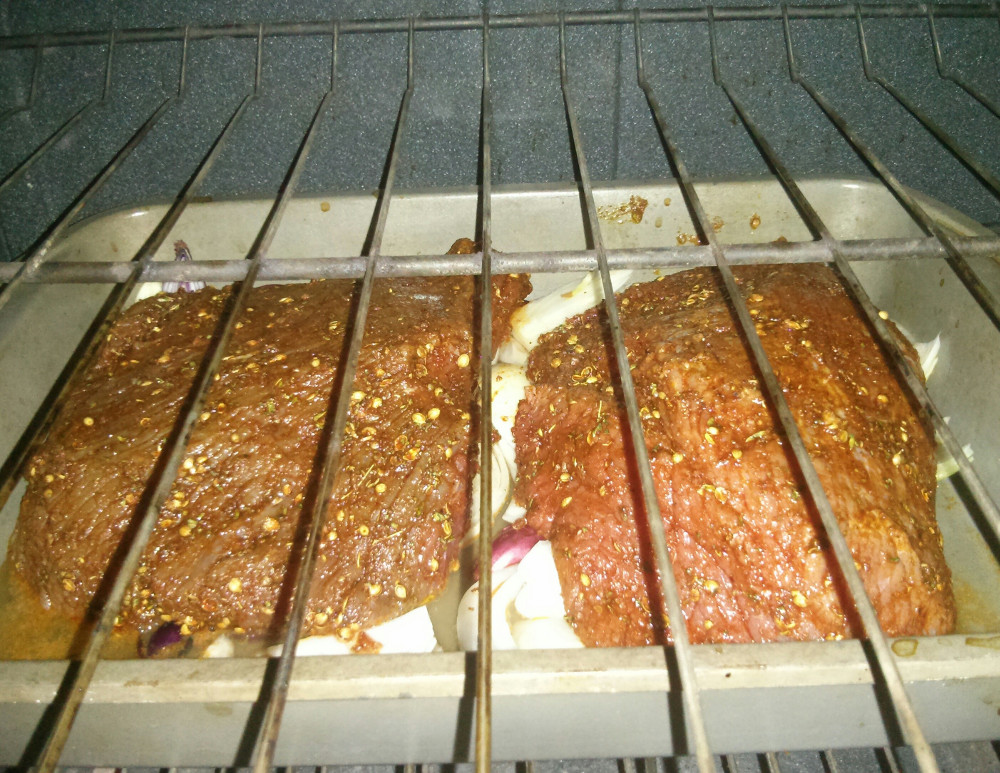 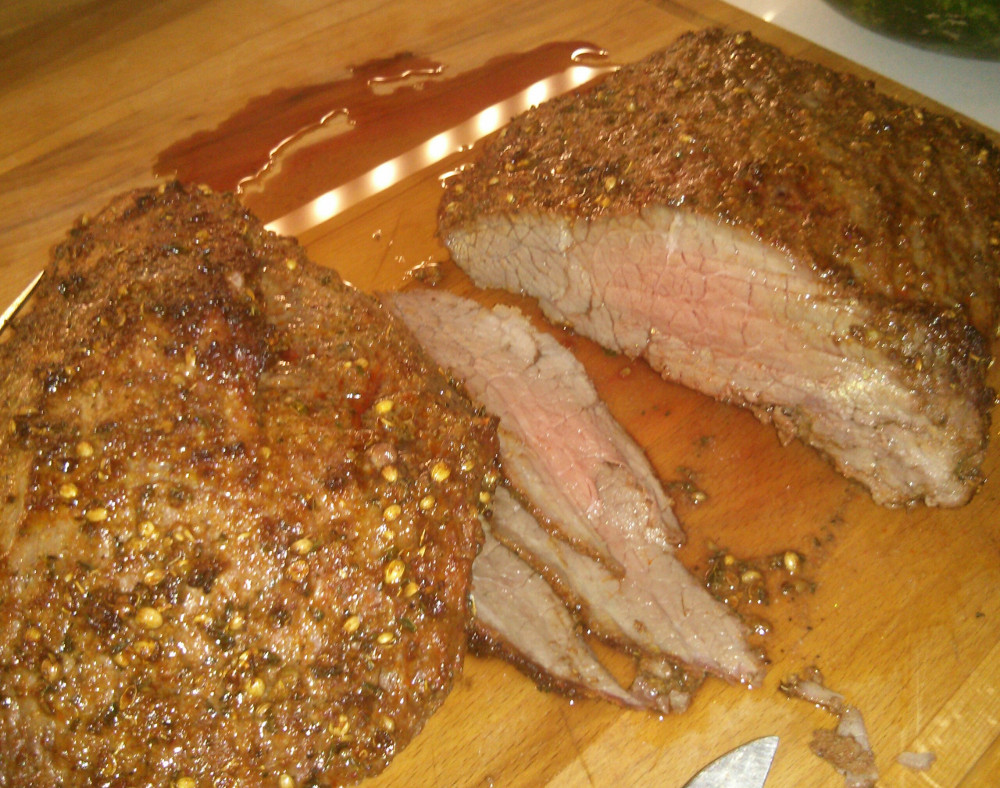 The rump cap has a much larger grain than brisket, so it cooks quickly. In fact, while I demonstrate how to roast it, you might be even more successful throwing it on the grill. Alternatively, braising it or slow cooking it will produce a very, very tender cut of beef. Don’t put it in the crock pot for Shabbat lunch though; it’s much too lean to survive more than four hours of cooking.

And just in case you really, really need the perforated cow, here’s a t-shirt you can buy.

If you insist on eating lean you can cut off the fat. But that would be wrong. – Ruth Reichl