The most popular large roast in Jewish homes by far is the humble brisket. Gracing Shabbat and yom tov tables for decades, this simple, straightforward cut of meat is transformed into a savory masterpiece with a minimum of fuss, with enough meat to serve a full compliment of friends and family.

When faced with a four-kilogram chunk of meat, even experienced cooks can begin to doubt whether they’re going to be able to turn this oven-stretching expanse of beef into something edible, let alone delicious. Brisket is a pretty fault-tolerant cut of meat, and even if it cooks too long, the worst that will happen is that the meat won’t be in clean slices.

Since this large, mostly lean, pretty tough piece of meat comes from a regularly exercised area of a cow, it needs to be cooked for a long time until the connective tissue melts into the meat. One of my instructions says to slide a fork into the meat to test for softness. First, use a carving fork, and stick it into the meat while raw, then after 30 minutes in the oven. You’ll immediately notice the difference. Then after three and a half hours, stick it again. After that point it should start to get soft, but if you leave it for too long, it’ll shred when you slice it.

Speaking of slicing, brisket required that you slice it against the grain. The “grain” in beef simply means the muscle lines (or striations) that are in the meat. Cut perpendicular to those lines. Easy. 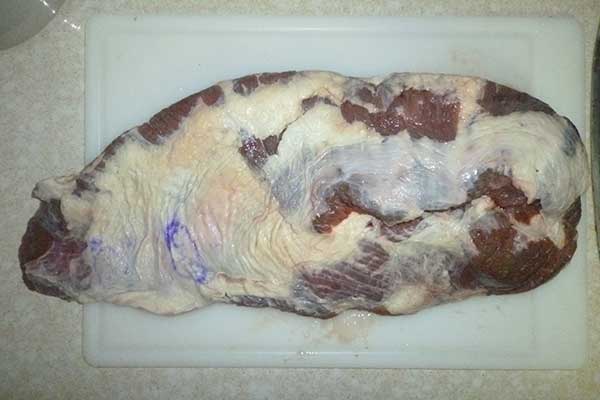 The entire brisket is large, heavy, and flat. There's a point on one end (left) and a second flap of meat called the deckle on the opposite side. 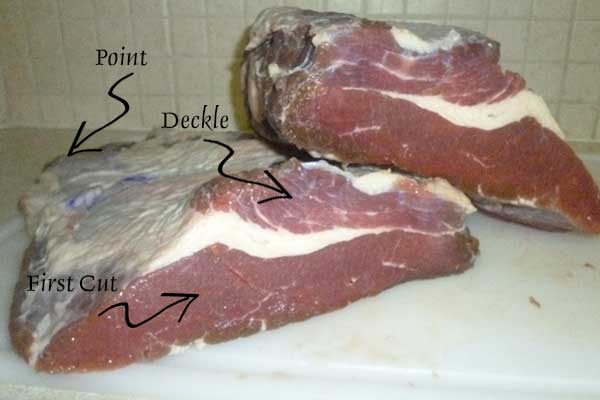 You can clearly see the two pieces of meat that comprise the whole brisket. The brisket can be sliced in half or even thirds for separate meals. 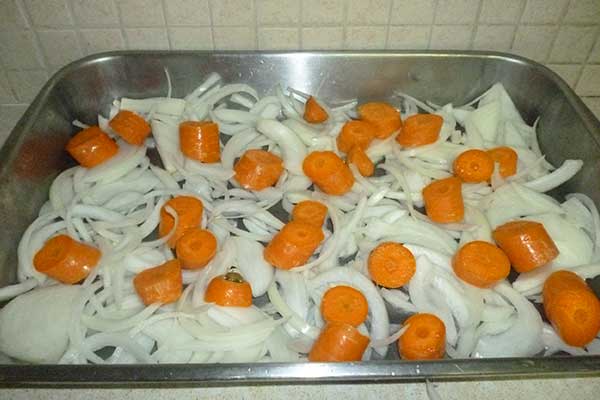 Roughly chop onions and carrots into the bottom of your roasting pan. 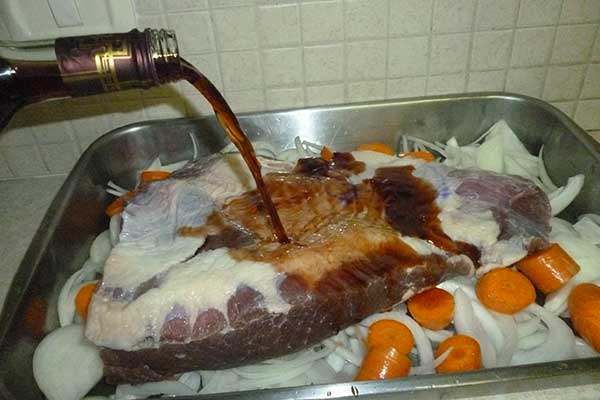 Place the meat in the pan, then pour wine over the meat until the bottom of the pan is completely covered in wine. 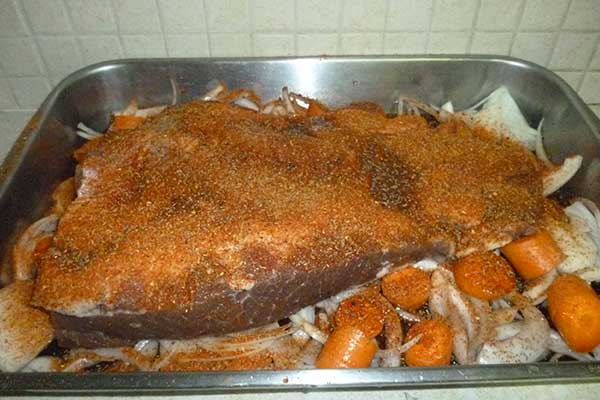 Use a mixture of salt, pepper, paprika, garlic powder to season the meat. 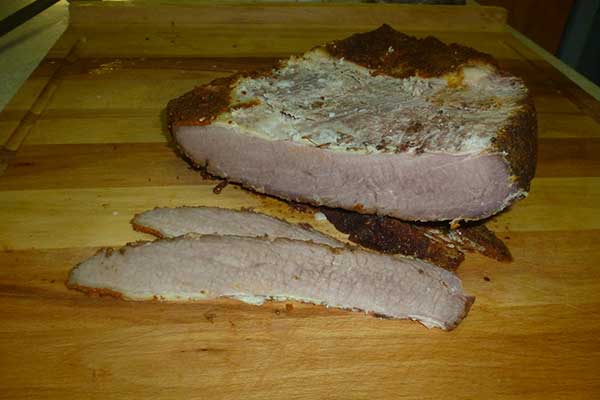 After cooking in the oven covered at 160°C (325°F) for four hours, test the brisket by sliding a fork into the meat. It should go in with little resistance. Uncover and brown for 20 minutes. Remove and let rest for 20 minutes. Slice the meat into thin slices against the grain.

It should be noted that my wife’s recipe is even easier than this one, and very popular where we live. She leaves out the vegetables and uses only onion soup mix instead of a spice mixture. While I don’t bother to hide my disdain for soup powders as an ingredient, there is nothing inherently evil about them. What I dislike is that it lacks the depth of flavor that a rich mixture of spices can bring to the dish, the desiccated vegetables bring no noticeable flavor, and have no nutritional value. And it is worth noting that the onion soup mix you pay for is about 45% salt.

10 thoughts on “Preparing and Cooking a #3 Brisket”

"A great chef is an artist that I truly respect." ― Robert Stack