Israel’s consumes more turkey per capita than any other country in the world [Ed. except the United States], owing in part to the fact that we raise the wrong cattle here. So turkey is the protein of choice for us. We eat it in shwarma, deli meat, and hot dogs (God help us), among other things. Ironically, a typical Israeli oven can’t roast a whole bird. Well, not a gargantuan 15kg anyway. Luckily they come in all sizes, and the smaller ones can be configured to fit in the smaller hotboxes.

Carving a whole turkey is one of the culinary glories that Americans brought to Israel. It is the common pastoral scene we picture when thinking about a carved turkey: a holiday dinner, the whole bird being presented on a large platter to the patriarch of the family, who labors over slicing the turkey for the wide-eyed dinner participants.

Which is, of course, totally the wrong way to do it.

The method of carving we think of is slow, inefficient, and tremendously wasteful of the meat, which is simply not okay. Aside from the morsels that get left behind, carving a bird at the table with a ceremonial knife that hasn’t been properly sharpened in a generation begs for glasses, dishes, gravy boats and whatnot to be knocked about by someone whose only other culinary contribution to the house is flipping burgers on the grill during the summer. And if you think twenty people can sit calmly around the table watching some calcified old geezer hack up a bird his wife spent hours preparing, then perhaps you do live in a Rockwell painting.

There’s no denying a whole roast turkey is a very pretty thing to look at when done properly, so my suggestion is take a picture of it, post it to Pinterest for a keepsake, and then roll up your sleeves, ’cause things are gonna get greasy.

And while I freely acknowledge that you’ll find variations on how to carve a turkey, ignore them. This is both the quicker and the safer way to do it. I only say this after carving hundreds of these birds in all sizes. 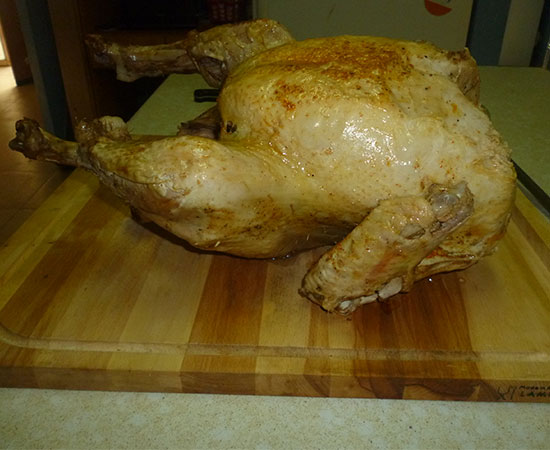 After allowing the turkey to cool for 20 minutes, transfer it to a large cutting board in a clean work area. 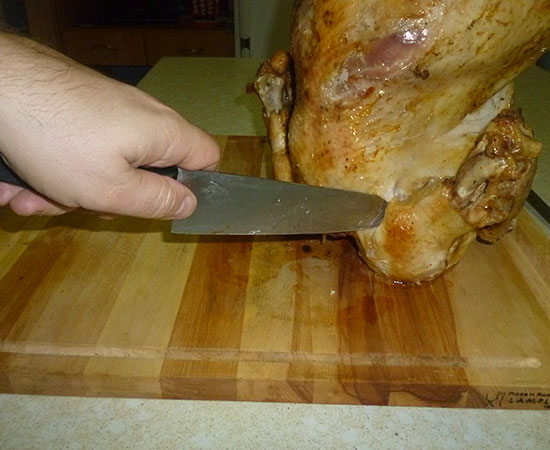 Hold the turkey up by its legs. Make a V-shaped incision where the wing meets the back, and from the outside of the wing down to meet the other cut. 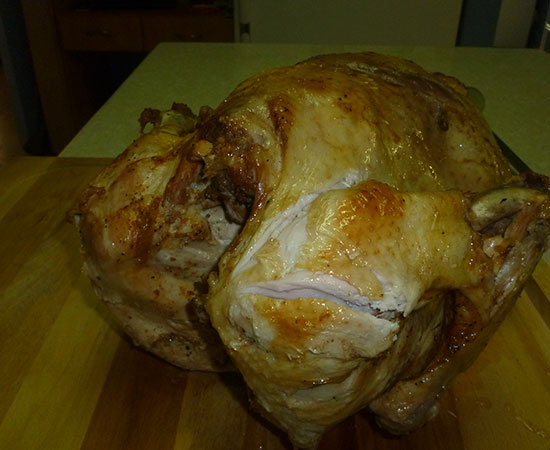 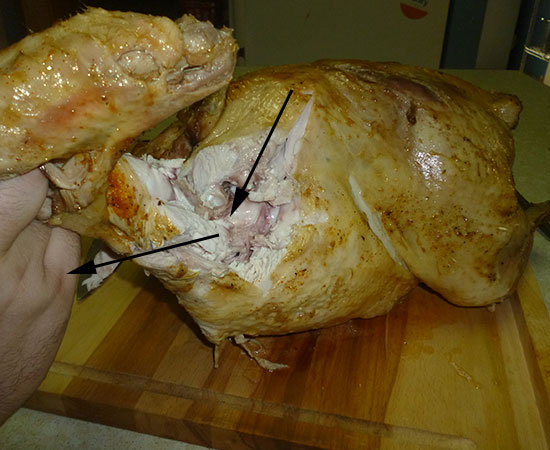 Pull the wing towards you to expose the wing joint, then pull down to free the wing from the turkey. 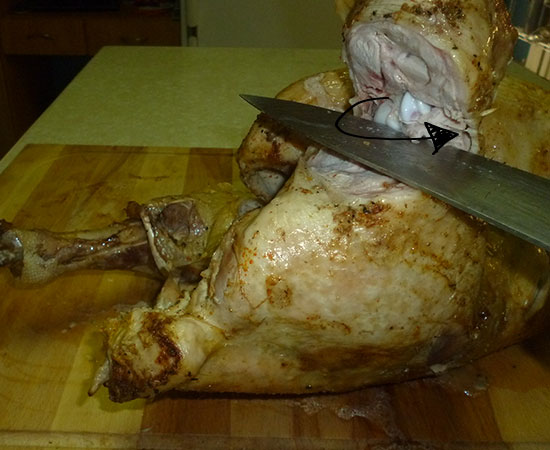 Grip the turkey leg and pull up. Make an incision where the leg meets the thigh. 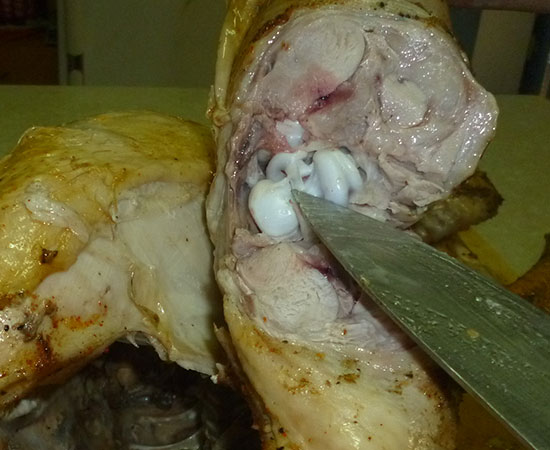 The leg bone and thigh bone are connected at the joint. Cut through the ligaments to separate the bones. 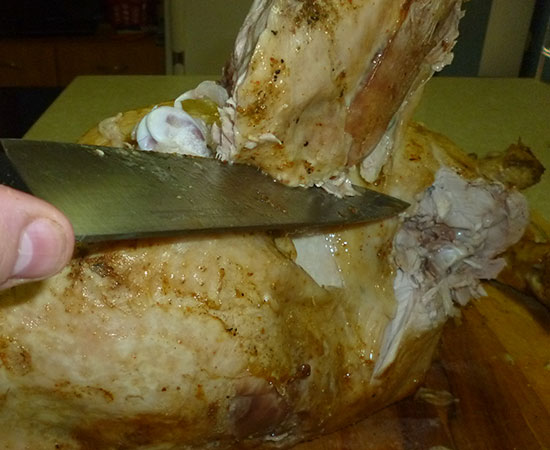 Cut below the leg to completely remove it from the turkey. 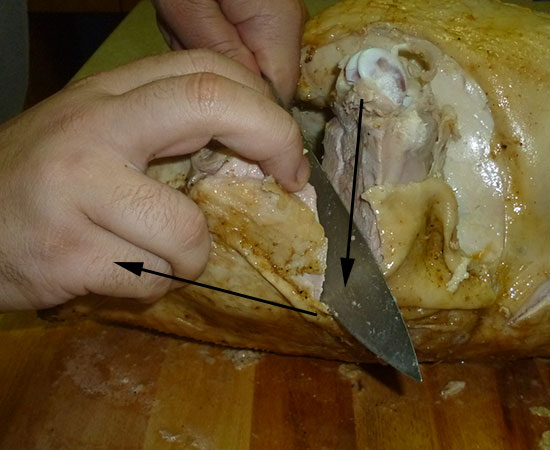 Cut down along the edge of the thigh bone, then cut back towards the tail to free the segment of thigh meat from the turkey. 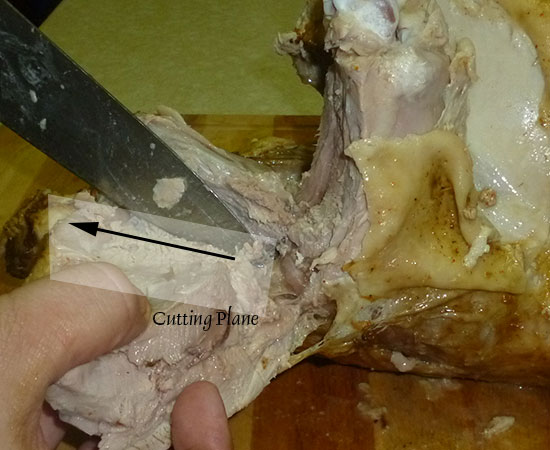 Cut vertically against the flat bone to scrape the meat away from the bone. 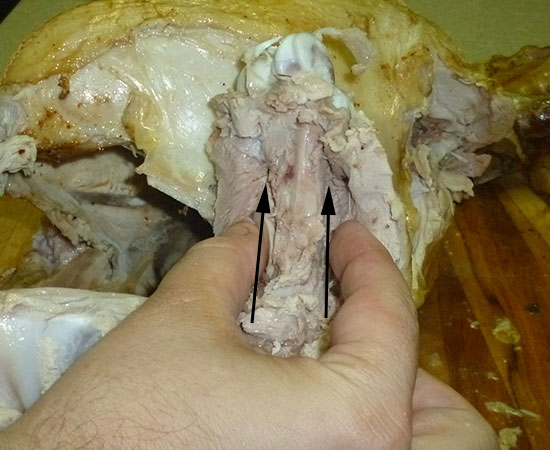 I like this next part. Push away the meat from either side of the thigh bone. 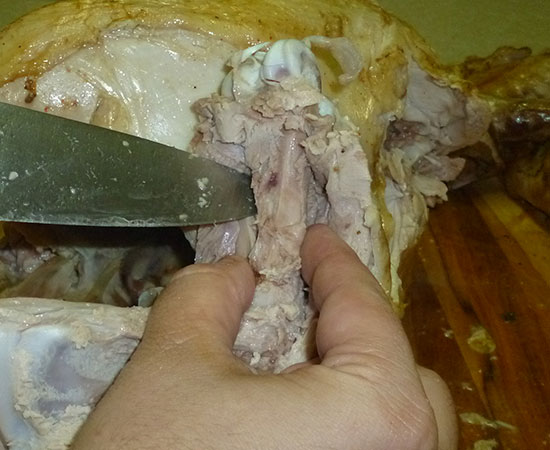 Slice down on either side of the bone with the tip of the knife. 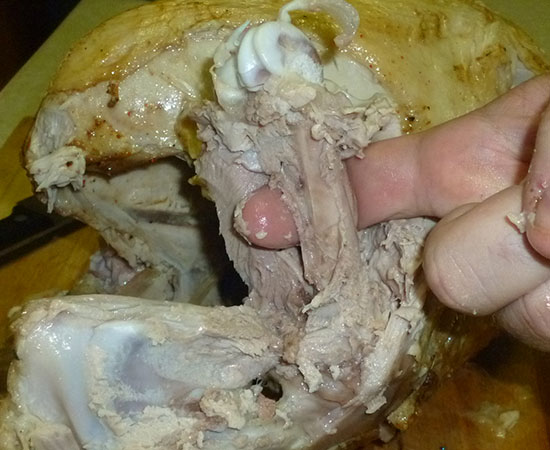 Poke your finger through the meat behind the bone. Pull your finger up to free the bone from the cartilage. 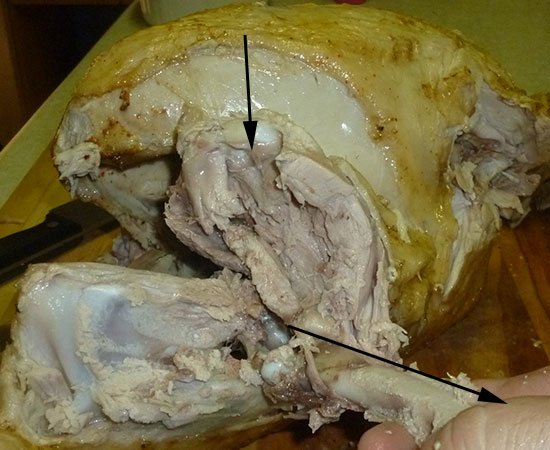 Grip the bone, pull down and twist to disjoint the bone.

Cut down with the tip of your knife where the meat is attached to the flat bone. 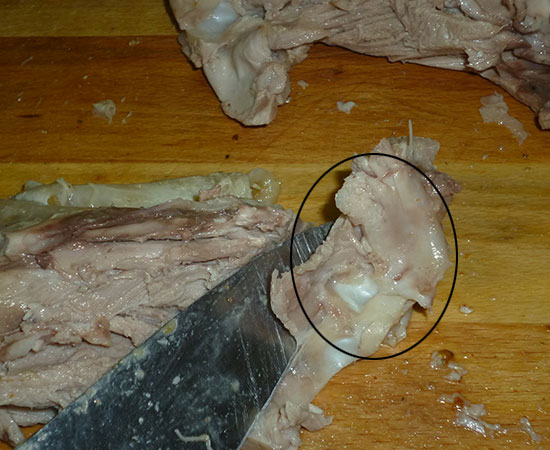 Cut the cartilage end off of the thigh meat. 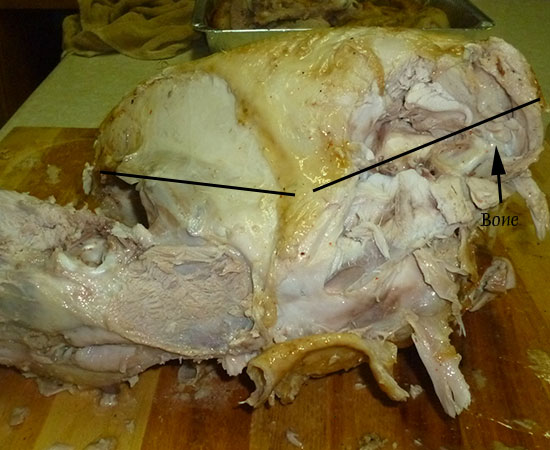 The breast is slightly triangular. You'll need to make two shallow incisions to free the breast meat from the turkey. 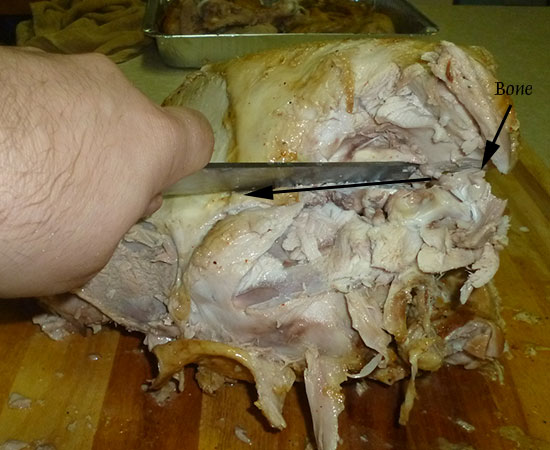 Cut along the top edge of the bone where the wing was attached with only the tip of your knife until you reach the Y-shaped bone. 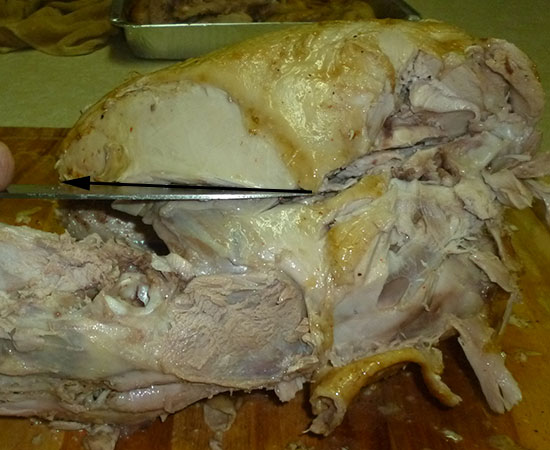 With the tip of the knife, cut from the Y-shaped bone back towards the point of the breast. 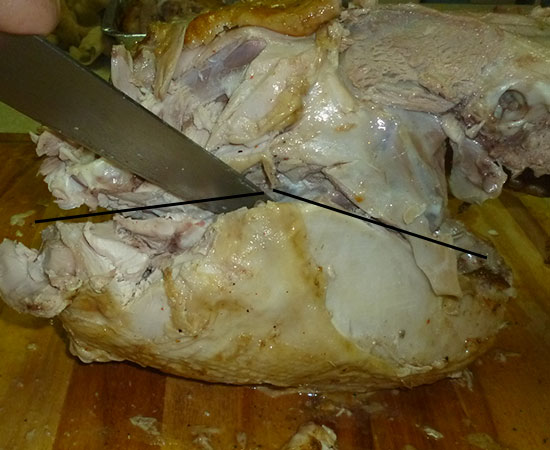 With the point of the knife, using shallow cuts, scrape the meat away from the ribs. 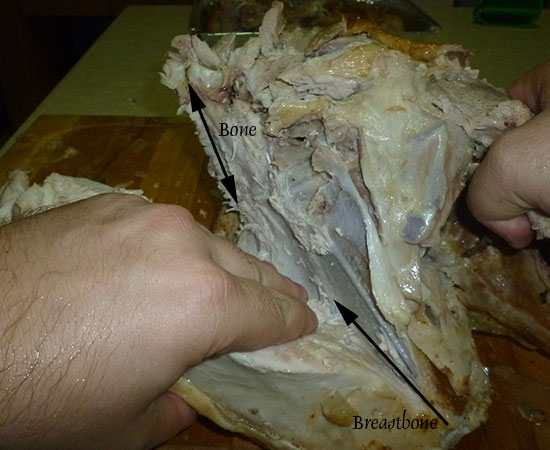 Pull the breast down and away from the turkey. You may have to make a cut at the bottom of the breast to free the meat from the breastbone.

All the Turkey Parts

The Most Important Part 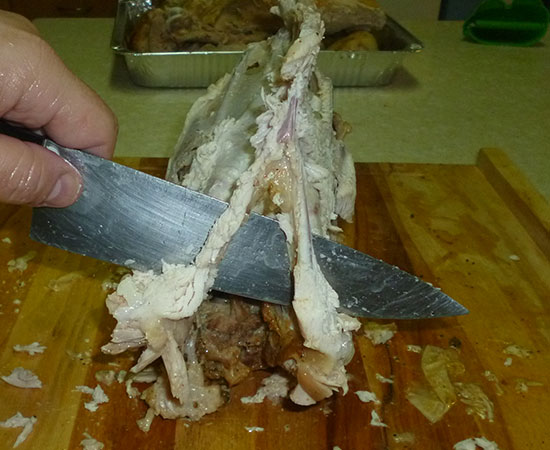 In front of the breastbone is the wishbone. Cut down to separate it from the carcass.

For those who remember:
httpv://www.youtube.com/watch?v=0EEl7uV6YQU

"The secret of good cooking is, first, having a love of it… If you’re convinced that cooking is drudgery, you’re never going to be good at it, and you might as well warm up something frozen." ― James Beard